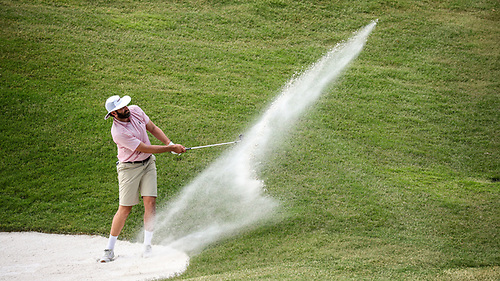 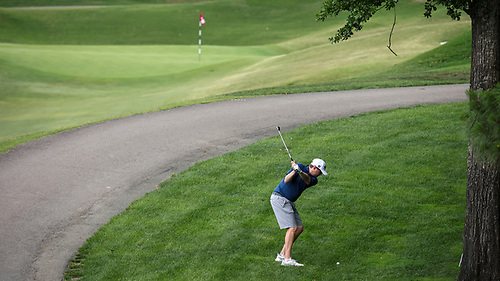 BIRMINGHAM, Ala. -- Chad Wilfong and Davis Womble went undefeated at the U.S. Amateur Four-Ball Championship this week, but they had to rally to subdue a pair of unlikely opponents in the final.

Wilfong, a 41-year-old reinstated amateur who is now a financial planner in Charlotte, N.C., made a 10-foot birdie putt on the 18th hole Wednesday at The Country Club of Birmingham's East Course to tie the match. He and his former Wake Forest teammate Womble then parred the first extra hole, and that was good enough to claim the title.

Over the weekend, they had earned co-medalist honors by shooting 65-63--128 in stroke-play qualifying. Two other teams matched that total, and the Wilfong/Womble combo went into match play as the No. 3 seeds.

Their opponents in the final, Drew Stoltz and Drew Kittleson, weren't even planning on being in Birmingham as recently as a couple of weeks ago. They had failed to qualify for the Four-Ball last fall, but were second alternates and got into the tournament at the last minute.

Once they got in, they took advantage of their opportunity. Qualifying easily for match play with a 63-67--130 aggregate, they were the No. 9 seeds, and they got their money's worth in each of their five matches, never finishing before the 17th hole.

In the semifinals, they faced a pair of Wake Forest alumni -- Evan Beck and Dan Walters, the No. 5 seeds. The match was all square through 13 holes, but Kittleson and Stoltz birdied the 14th and 17th to win 2&1.

It was the Beck/Walters tandem that eliminated the last remaining pair from the Minnesota qualifier that took place last fall at Golden Valley G&CC. Tim McKenney and Will Strickler, a couple of former Florida teammates (Billy Horschel was another of their teammates) were seeded 28th, but they were holding their own against Beck and Walters through 10 holes in a first-round match. The two teams were tied at that point, but Beck and Walters ran off five birdies in a row for a 5&3 victory.

Beck and Walters won what was probably the most talked-about victory of the week. Playing the team of Ty Gingerich and Cole Harris in the quarterfinals, they were 1 up with two holes remaining Tuesday when the match was suspended because of darkness. When they arrived at the course the next morning, they were informed that their opponents had been disqualified because Gingerich had used a putter with a non-conforming grip. It was a split grip, but the two parts of the grip were separated by less than an inch, and they need to be 1 1/2 inches apart, according to USGA rules.

In the final, Kittleson, a former All-American at Florida State, and Stoltz, who was a star at TCU, appeared headed for another narrow victory. They won the sixth hole with a par and birdied the 182-yard, par-3 eighth to go 2 up on Wilfong and Davis. Wilfong and Davis birdied the 417-yard, par-4 ninth to cut their deficit to 1 down, but they couldn't get any closer on the next eight holes, all of which were halved.

Then Wilfong made his clutch 10-footer for birdie at the 18th, setting up the victory that he and Womble claimed on the 19th hole.

At The Country Club of Birmingham

(Qualifying was played at both courses, but all matches will be played on the West Course.)