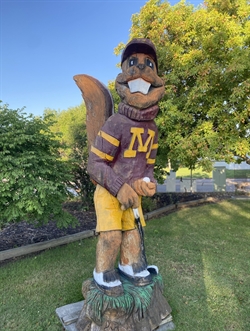 It was another wonderful week of golf on the Driving Minnesota Golf Tour. With one more week to go, I continued to focus on highlighting Minnesota’s rich golf history and phenomenal courses that make up the golf landscape.

It started on Monday at Les Bolstad Golf Course in Falcon Heights, one of the more historic courses in the Twin Cities. Founded in 1929 and owned by the University of Minnesota, the course has played host to several Big Ten championships and has a unique intertwined history with its neighbor, Midland Hills Country Club. I sat down with General Manager Greg Jamieson, who has documented the over 100-year-old history of the course by digging into University archives and Minnesota Historical Society records. His passion for teaching the course’s history is admirable. Many of the game’s legends have played the course, and there are unique pieces of memorabilia given that this was the Gopher’s home course for many years. While they now mostly play matches at other courses around the Twin Cities, Les Bolstad GC is home to their newly built practice facility.

Unfortunately, the golf course has been somewhat caught in the middle of the University’s bureaucracy. There are several course buildings on the property instead of a large single clubhouse, which hurts the flow of business, and the irrigation system needs renovation. There are always rumors of the course being sold, which would really be a loss to the Minnesota golf community. Les Bolstad GC is a treasure trove of history and a key part of the Minnesota Golf landscape.

Afterwards, I played a round at Francis A. Gross National Golf Club. It was one of the most enjoyable tracks I’ve played so far. Situated in Minneapolis’ St. Anthony neighborhood, it’s a historic public track that hosted the 1964 USGA Public Links Championship and is nearing its 100th anniversary. The clubhouse is beautiful and the raised practice putting green makes for a neat visual coming in on the 9th and 18th holes. The holes are straightforward and gettable, but of course trees are a factor if you miss the fairway. This course is extremely accessible as well, due to its location right off 35W. The conditions here are great compared to some of the other city tracks, and although the greens weren’t real fast they were consistent and in good shape.

On Tuesday, I visited the Town and Country Club in St. Paul. It’s the oldest golf course in Minnesota, with the first five holes laid out in 1893. It’s considered to be the third oldest course in the country still played along its original fairways.

A founding club of the MGA, the Town and Country Club was the first highly prestigious club in the Twin Cities, home to railroad magnates such as James J. Hill and other wealthy Minnesotans. The course offers a unique assortment of holes including back-to-back-to-back par fives, plus spectacular views of the Minneapolis skyline.

On Wednesday, I visited Burl Oaks Golf Club in Minnetrista. Burl Oaks is a beautiful golf-only club coming up on its 50th anniversary. I played here with three gentlemen who play the course nearly every day, including one 85-year-old who consistently shoots his age! His talent around the greens was really fun to watch. I spent some time after my round with head pro Brian Seiwert, who has been at Burl Oaks for five years after previously spending time at Bearpath CC and Minneapolis GC. Brian said something during our conversation that really stuck with me: “At our club, you could have a guy struggling to make his car payment having a post-round drink with a big-time CEO worth millions. But it doesn’t matter — they’re just hanging out, having fun and enjoying their time together.” Burl Oaks is filled with friendly, down-to-earth people who appreciate the game and each other’s company.

My week ended with a visit to The White Bear Yacht Club in White Bear Lake, a course that has earned a reputation as one of Minnesota’s best. It’s most unique feature is the rolling hills that make for some incredible fairway lies where your feet are even with your head. It also features a hole, No. 4, that requires a tee shot over a very busy road where you can assign a whole new meaning to “hitting a driver” if you mistime when to hit your tee shot. And although the greens had just gone through the aeration process, the conditions were excellent and it was a treat to be able to play such a phenomenal course.

There is one full week remaining on the Driving Minnesota Golf Tour. Even in that short time, however, there are plenty of stories to tell. My heartfelt thanks goes out to everyone following along this summer as I attempted to share my journey experiencing what Minnesota golf has to offer. Stay tuned as we finish strong!

Favorite Hole: I love short par threes. I think they are some of the most fun and exciting holes in golf. So, naturally, I really enjoyed the third hole at White Bear Yacht Club, a 98-yard par three with a gettable pin.

Best Shot: Golf comes down to putting. And I saved a 79 at the White Bear Yacht Club with an eight footer on the 18th… so it’d have to be that.