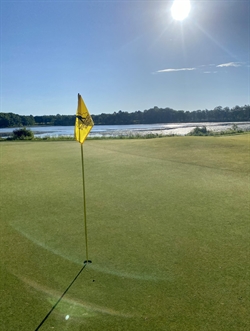 I’m not sure if there are words to describe the week I just had on the Driving Minnesota Golf Tour. I played 13 golf courses in seven days, and while it’s been a long week of travel, I wouldn’t trade it for the world. The courses I played and the people I met exemplified Minnesota’s place as a top state in the world of golf.

I played the following courses.

My first visit of the week was to Mendakota Country Club in Mendota Heights. It was one of the purest golf experiences I’ve had on tour so far. The course is meticulously maintained, and on the closing stretch of difficult holes I felt like I was trying to close out the Masters. Except, instead of the Masters, I was just trying to break 80 which, believe it or not, I did! The par-four 16th hole forces a long carry over water lining the right side in order to have a look at the green in two. After that, the 17th hole is a long par-three over a pond. I breathed a huge sigh of relief when I made it onto the green.

On Monday, I linked up with Jeff Stouds of Break 80 Golf at Territory Golf Club in St. Cloud. This course is a hidden gem, with a links-style front nine and a back nine carved into the forest. Jeff is an elementary school teacher who decided to build an instagram community of golfers with the common goal of breaking 80. Golf courses — please offer special rates for teachers. They work so hard to build strong communities and golf might be the only way they can relax. Unless they aren’t playing well, in which case golf might be more frustrating than dealing with an unruly kid. But alas…

Monday afternoon, I visited Pheasant Acres Golf Club in Rogers. This was a special round for me for a couple of reasons. One, I got to ride one of the Finn golf motorcycles! It was a really neat experience. Two, I holed out from 80 yards to make an eagle. And three, it was my first-ever round shooting even par. It felt really good to accomplish that feat given how much time I’ve spent on my game over the course of the summer.

On Tuesday, I got to play a round at the historic Interlachen Country Club in Edina. It’s a special experience to play a golf course that has been home to so many legendary moments over the years. Interlachen Country Club is one of those historic courses, first hosting the Western Open in 1914 and then the U.S. Open in 1930 which Bobby Jones won for a $1,000 prize. Since then, it’s hosted most major American golf tournaments and is generally considered to be one of the top courses in the country. I experienced golf at its finest during my visit here, and although the course isn’t open for public play, it is impossible to tell the story of Minnesota golf without it.

On Wednesday, I kicked off my ten-day trip up North with a visit to Eagle’s Landing, a hidden gem right off Highway 371 that should be a must-stop for any golf vacation up north. The course encapsulates everything great about Minnesota golf: the people are friendly, the grounds are well-kept, and it really feels like you’re playing in the woods. Home of the longest par five in the state at 680 yards, plus some of the largest greens I’ve played on tour so far, this is a really fun course where 18 holes and a cart are only $41.

Afterwards, I drove up to the beautiful Madden’s Resort on Gull Lake and played all three courses on the property — Pine Beach East, Pine Beach West, and The Classic. Pine Beach East was the original course at the property, and was built in the 1920s during the Great Depression back when people were coming up to Brainard on a train. The Madden brothers were busy selling lake lots, but because nobody had cash during the depression they instead acquired the land that is now the Classic, which is a truly spectacular course that ranks 59th on Golf Digest’s ranking of the country’s top 100 public courses. The first few holes wrap around Bass Lake and each hole offers choices that force golfers to make risk/reward calculations on each shot. Each of the par threes are visually stunning, and even the tougher holes rewarded good tee shots. The greens were fast and pure, and the bunkers were extremely intimidating. Good golfers can get into trouble, as the course requires precise placement and a good short game. It was a beautiful golf course, and it was a pleasure to meet head pro Glenn Hagberg who is just doing a great job up there.

Tired yet? Not me! Let’s keep going.

Afterwards, I had a chance to visit the new Gravel Pit golf course, an awesome project by the Classic Architect Scott Hoffman. Over the last decade, some of the world’s most famous courses have added incredible par-three courses to their property. Think Augusta National, Bandon Dunes, Pinehurst, and even Tiger’s new course in Missouri. These par three courses add value because they make golf shorter both in yardage and time, plus par threes are normally the most fun holes to play even on regulation courses. The gravel pit, an extreme par-three course which will be completed by next season, is poised to become a true destination in the Brainerd area. These holes look incredible, and many are modeled after famous par threes around the world. I can’t wait to see the impact this course has in helping Brainerd continue to become a nationally-recognized golf destination.

Thursday morning, I experienced 27 holes of traditional Northwoods-style golf at Crosswoods Golf Course in Crosslake. The first few holes on the Sunrise course beautifully framed greens between trees, and the par-three fifth was one of the most scenic holes yet on tour. The course has an interesting history, founded by the Stone family in 1969. Now, Mike Stone and his wife Kelly own and operate the course. Mike is very active in the MGA, serving on the executive committee, and is also a mini-golf course designer with two courses on property and a third in Austin, TX. Their daughter, Savannah, is the assistant pro and has excellent experience from her time working at both Hazeltine and Braemar. It was great to meet someone like Mike who is so creative in the way he thinks about the nexus of golf, business and entertainment.

Thursday afternoon, I visited Golden Eagle Golf Course, a gorgeous course that doesn’t get as much attention as some of the other big name courses in the Brainerd Lakes area but still offered a first-class golf course experience. This course was a joy to play, and the scenery was just as good if not better than other courses in the area. I would love to come play this course again.

On Friday morning I visited the Whitefish Golf Club in Pequot Lakes. Beautiful, towering pines line the fairway, but unfortunately there is a price to pay as a golfer for magnificent scenery. This is a very nice golf course which will punish wayward shots, and as it was my first time playing, I was often confused on where to hit the ball. The game would be a lot easier if there were no hazards or elevation changes. But even that didn’t interfere with a great morning of golf here in Brainerd. I would love to come back and play this course again now that I have a better idea of where not to hit the ball.

You’d think by now I would be bored of all this golf, and that I’d be having a tough time describing how each course is special. But let me give you an example of how that couldn’t be further than the truth. On Friday, I had just finished my 36th hole of the day, 18 at Whitefish and 18 at Cragun's. But as Cragun's offers 27 holes right now, in the midst of a renovation that will add another 18 Tom Lehman-designed holes to the property, I figured I may as well make it back-to-back 45 hole days and play the final nine holes at Cragun’s Legacy. I simply couldn’t get enough. The course wrapped around Lake Legacy, which made for tee shots with long forced carries, and there were a few holes with elevation changes that looked just godly in the sunset. Even at the end of a 45-hole day, I was sad to be done.


Favorite Hole(s): I had two favorite holes this week: No. 3 on Course Three at Cragun's, and No. 3 at Eagle’s Landing.

No. 3 at Cragun's a short par-three with a view of Lake Legacy on the left side of the hole, protected by a bunker complex short left of the green. A pulled shot here is serious trouble.

No. 3 at Eagle’s Landing is a long par-three that features towering pines running along both sides of the hole until they meet behind the green. I made a 30-footer here for birdie, and it felt even more special knowing that the course was really carved out of the forest.

Interesting Person: Scott Hoffman. There are only two courses on Golf Digest’s Top 100 Courses You Can Play list that were designed by amateur architects: Pebble Beach and The Classic. Scott told me how they had interviewed architects such as Rees Jones for the job, but ultimately decided that he should just go ahead and do it. He is not a trained architect, but has accumulated an impressive wealth of knowledge that he is now putting to use at The Gravel Pit.

Best Shot: I continued to play well this week, breaking 80 on 11 out of 13 tries. I had three memorable shots this week. The first came at Pheasant Acres on Hole No. 12. A short par-four, I set myself up with a good drive with about 80 yards to the flag. Holed it. The second came at the par-three No. 8 on Pine Beach East. Glenn Hagberg can vouch for me on this. I hit a poor first shot into the bunker and had a terrible lie — my feet were on the grass while I was trying to hit out of the bunker. Slam-dunked it right into the cup. It was awesome. A couple kids on the tee box sprinted down to give me high fives. And third, I holed another bunker shot at No. 1 on Course Three at Cragun's.