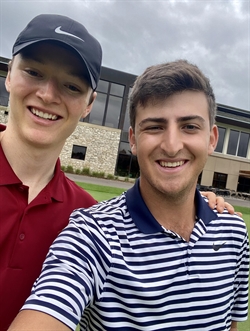 I love a lot of things about this job: the golf, the travel and the constant McDonalds I eat on the road. But when the tour is done, what I’ll remember most is the storytelling.

I’ve had the privilege of telling some great stories in the Minnesota golf community. From the development of the Gravel Pit par-three course in Brainerd to 14-year-old entrepreneur Seth Damsgard’s yardage book company, there are a myriad of unique stories that make up the golf landscape. This week, I placed a special emphasis on telling the stories of trailblazing Minnesotans in addition to taking a deep dive in Minnesota golf history.

It started on Sunday at the historic Highland National Golf Course in St. Paul. Highland National is notable not just because of the course itself, but also because it was here that the legendary cartoonist Charles Schulz developed his love for golf. The course is beautifully manicured, especially for a municipal track, and features pieces of Peanuts history throughout as a tribute to Schulz. There is a large Snoopy-shaped bunker on the 15th hole and a statue of Charlie Brown right outside the clubhouse. Come here for the golf and stay for the history lesson.

On Tuesday I visited Bent Creek Golf Club in Eden Prairie. The course is a fun test for any golfer: its length is not overpowering but strategically placed bunkers and other hazards make it a course that rewards strategy. The conditions were excellent, and the greens rolled pure. Craig Pratt, a loyal tour follower, commented that Bent Creek is the best bar in town with a course.

Wednesday, I visited the tradition-rich Wayzata Country Club which features a beautiful championship golf course that was renovated in 2008. The course has hosted two USGA national championships and boasts one of the strongest memberships in Minnesota. The course was serene.

It’s amazing who you meet on a golf course. I was paired at Wayzata Country Club with two guests — a course rater for Golf Digest, and believe it or not, Tiger Woods’ personal chef. Supposedly Tiger likes his food very simple and is a big fan of steak and potatoes.

Thursday, I visited the famous Hazeltine National Golf Club in Chaska, home of the 2016 and 2029 Ryder Cups as well as a myriad of other events. I was hosted by Cheryl Schneider, the club’s president in 1992, making her one of the first female presidents of any club of Hazeltine's stature in the nation. She shared a story with me about her experience trailblazing the way for women in golf leadership. She attended a golf event back in the 90s with other local club presidents, and once she got to the course, she realized they had mistakenly given her a locker in the men’s locker room! It was that extraordinary at the time for her to be Hazeltine’s president, yet the course's track record of hosting successful events speaks for itself.

Schneider is also an influential advocate of the Evans Scholars Program, which gives full-tuition scholarships to deserving caddies. Our round was cut short due to inclement weather, but I’ll hopefully be visiting Hazeltine once more before the summer’s end.

I closed out the week with a round Friday at Oak Ridge CC in Hopkins. I played with Casey O’Brien, the inspirational five-time cancer survivor and member of the University of Minnesota Gophers football team. Here’s a link to a piece ESPN’s College GameDay did on his story.

O’Brien now devotes much of his time volunteering at the Masonic Children’s Hospital and assisting in their fundraising efforts. His work ethic and perspective are admirable, and he’s quite a stick, putting up a 79 from the tips!

We were also joined by Brooks Bollinger, Casey’s former coach as well as Vikings quarterback and Wisconsin standout. The course itself is a phenomenal layout with a variety of very difficult holes. There aren’t many birdie opportunities on the course, and although it’s only a par 70 this track has some serious teeth.

Oak Ridge is also a unique golf club in Minnesota, given its predominantly Jewish membership. Until the early 1960s, Jews in the Twin Cities were often unable to gain access to other clubs, so a few decided to build one of their own. In response, Oak Ridge Country Club was built for everyone “who knew the difference between a golf ball and a matzo ball.”

It is a reminder of golf’s often not-so-pleasant history of exclusion, which leads me, as a member of golf’s next generation, to make the call for the sport to continue to become a driving force for good in the world while leaving behind the old ways of exclusion and discrimination.

Favorite Hole: I didn’t get to play it due to rain, but it was neat to drive around Hazeltine on a golf cart and stop on the tee at the signature 16th hole. A decently long par-four with views of Lake Hazeltine running along the right side, this is a legendary hole that has been home to some miraculous moments over the years. The hole also features the Payne Stewart Bridge, commemorating the 1991 U.S. Open Champion who died tragically in a 1999 plane crash.

Best Shot: As I stood on the 18th tee at Highland National, I knew I needed to make par to break 80. I hit a drive into the left rough, an approach shot to about 10 feet, and made the birdie putt to finish at 78.