A River Runs Through It

The I-94 tour is a grand drive to the northwest for great golf, food, attractions and unique topography along the Red River Valley.

Moorhead Country Club is a private 1937 par 72 eighteen on the Red River. “The course is an old-school track,” says Markuson. The country club has an excellent restaurant open to the public with a popular Sunday brunch.

At Village Green, the 1981 course is growing up since a 1994 update to 18 holes. In fact, last season, Markuson organized and was the keynoter at Village Green for Moorhead High School’s 51st Reunion. “It was a fun day and the course is really playable and challenging enough to keep it interesting for an event like that,” he said.

Moorhead’s third entry here is Meadows Golf Course, a Joel Goldstrand Scottish links attempt. He made the most of what he was given, creating three six-hole loops on flat terrain with few trees. But the result is a shortish par 71 course with balky course and slope ratings: 71.4/131 at 6490 yards from the blue, and 73.3/136 at 6862 yards from the black tees.

Hawley Golf & Country Club is reportedly a destination for Moorhead Country Club expatriates, and Markuson says it’s “not a long course, but has a nice feel.” Birchwood in Pelican Rapids is a par 34 nine off the south shore of Prairie Lake just north of town. There’s a 27-hole golf tourney there every August.

If there’s an outlier on this tour, it’s Bois de Sioux Golf Club. It’s in Wahpeton, North Dakota, just off Minnesota’s west coast on the Red and Otter Tail Rivers. The area is vibrant, especially with Wahpeton’s sister city Breckenridge, Minnesota. It’s also a former lake bed of Glacial Lake Agassiz. To be fair, the course has nine holes in both North Dakota and Minnesota. There’s a zoo south of the golf course and the rivers thread through the entire region, including the golf course. 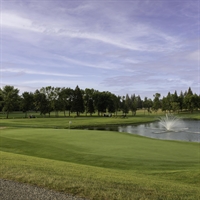 East on Highway 210 to Fergus Falls and Pebble Lake Golf Course, crafted in 1941 by Paul N. Coates, written about here several years ago. His effort resulted in this less-than 7k-yard tough muni at 71.2/133 from black/gray tees. There are many online comments regarding the excellent conditions at Pebble Lake. South of Fergus in Dalton lies Stalker Lake Golf Course Bar & Grill, a par 35 nine with a clubhouse screened porch overlooking the first and ninth fairways.

Tipsinah Mounds in Elbow Lake is a par 70 Goldstrand and tracks 6219 yards from the blues with a weekday green fee under 20 bucks. Out west, Wheaton Country Club is a par 36 nine in the town of Wheaton that sits at a widening of the Red River at Lake Traverse, as well as a confluence of Minnesota, and North and South Dakotas. The World’s Largest Mallard is in this flyway.

Moving forward and looping back to Balmoral–a resort in Florida, an island in the Bahamas, a hotel in Scotland, and a castle in England, but not in the dictionary. But this Balmoral is a golf course in Battle Lake, a par-72 course designed by Arnold Hemquist and beautifully located on Otter Tail Lake and south of Glendalough State Park. A couple of exemplary online comments (Trip Advisor) tell of great guys’ weekends. Short and easy at first glance, but the trees, terrain, 11 bunkers and 11 water hazards ultimately determine that. The course record is 64.

Roll north on 78 from there along the lake’s eastern shore to the town of Ottertail to find Thumper Pond Resort & Golf Course. Ottertail County hosted the 2021 Governor’s Fishing Opener, including reception and Media Row for the event. Pro Andrew Martinson also mentions that the course is home to the Ottertail Central High School Boys and Girls golf teams.

Ninety thousand Red Pines were cleared to make room for this popular course designed by Erik Niskanen. The setting also includes a large practice range and short game area and two putting greens. It’s impeccably shaped and manicured, with tree-lined fairways, water in play and neat flora displays establishing the setting for some beefy golf; i.e. 72.5/138 from the gold tees, and a 501-yard par-five finishing hole.

If you’re spending a week at the resort or cabin, there’s a 7-day membership available, and juniors under 12 play free after 3 p.m. with a paid adult. The resort has 78 suite rooms, an indoor water park and a spa in the forest and comments laud the customer service.

All things considered, I-94 and the Red River Valley go well together.

Chuck Lennon has produced the “Driving Minnesota” series in the Minnesota Golfer magazine for more than a decade. He retired from media relations at Explore Minnesota Tourism in 2012, where, having been a liaison with the MGA, golf resorts and courses, effectively positioned the state as a golf travel destination. A product of Cretin and Highland Park high schools, he honed his journalism skills at the University of Minnesota and the College of St. Thomas. He is a member of the Golf Writers’ Association of America.