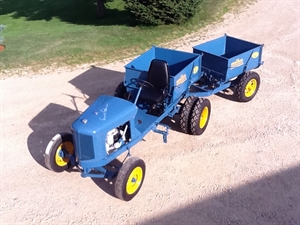 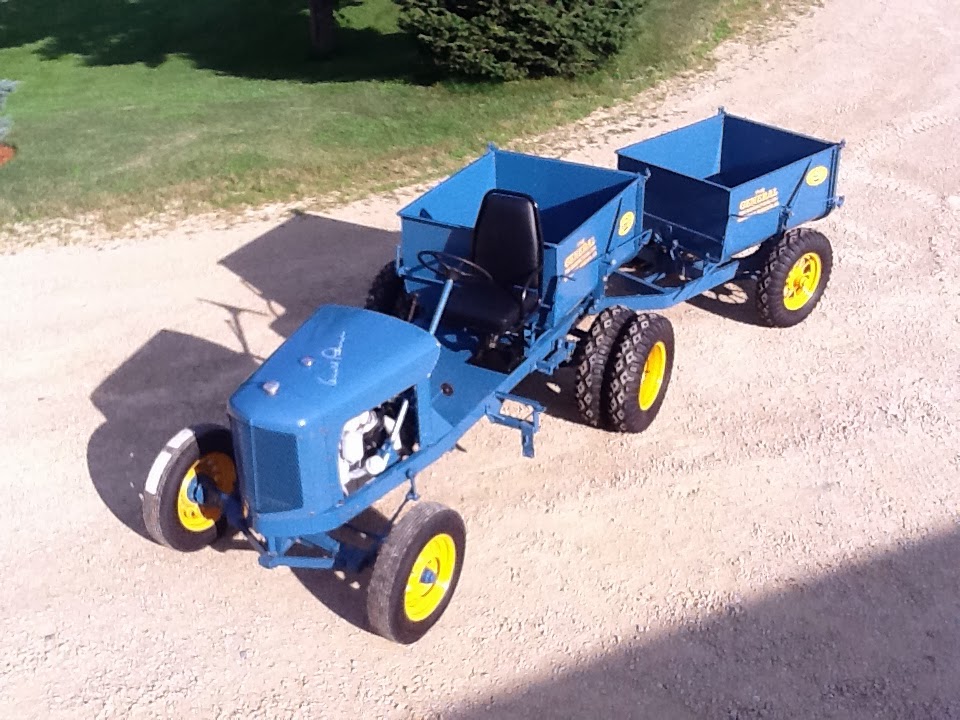 Minnesota Valley Country Club's vintage blue Toro tractor, a General model manufactured in 1941, will be on display at the Minnesota Golf Show, Feb. 14-16, at the Minneapolis Convention Center.


In 1941 the Toro Manufacturing Co. had three Toro Generals on the assembly line, building them for delivery in 1942 for their respective customers.  When WWII started the units were put on hold and Toro ,as many companies did, teamed up to help our armed forces.  When the war ended in 1945, Toro went back to the assembly line to complete their customer orders.  They called all three customers to ask if they still wanted their units, two said yes and one was rejected.  They asked their two customers if they could paint the two blue, (because they had left over paint from the war) and they approved.  Toro at the time had not found their signature RED color yet so they were painted and delivered.
These two units were the only two units ever manufactured and painted blue by Toro.  One was delivered to Minnesota Valley Country Club and the other to a friend of the president of Toro.
Around the mid 50's the president of MVCC called the president of Toro and asked him if he could make a trailer for the General.  The president of Toro replied, you know I think we still have one of those units around.  They found the 3rd unit that was never finished and built a trailer out of it for the Bloomington country club.
The Blue General served as an important part of the fleet of vehicles for MVCC until 1982 when it gained a degree of fame. Pennzoil and Toro had a contract with Arnold Palmer to shoot a Pennzoil commercial on a Toro tractor in each location where Mr. Palmer participated in a PGA Tour event. The 40-year-old Blue General Toro Tractor, owned by MVCC, was the prop used in the Minnesota commercial. As the next 30 years passed the old Blue General slowly disappeared to the back-side of a maintenance building on the course.
Three years ago Dave Otterdahl, the owner of Valley Construction and Repair, was selected to construct a new half-way-house at MVCC. As the project progressed, Otterdahl, who is an avid collector of vintage tractors (he owns four), and Mike Brower, golf course superintendent, were discussing a variety of old equipment in a junk pile behind the MVCC maintenance building. Then Brower pointed out a dusty old tractor, covered with rust - no blue paint visible, hidden under a pile of drain-tile pipe. “Why are you showing me that old piece of junk?” questioned Otterdahl. Without a word Brower marched into his office and returned with a green book, The History of Minnesota Valley Country Club. He flipped through a few pages and pointed to a picture, dating back to 1982, of Arnold Palmer sitting on the Blue General holding a can of Pennzoil motor oil.
Today, Otterdahl is the very overjoyed owner of the completely restored, 1941-1946 Toro General Golf Utility Tractor.  He loves the Tractor, but more than the Tractor he loves the history and the association with Arnold Palmer that was created by that “old piece of junk.”  Otterdahl, contacted The King’s business manager to see if there might be any interest in having Mr. Palmer autograph the beautiful piece of history.  Within fifteen minutes The King himself was on the line, inviting Otterdahl and his wife, Cindy, to bring the hood of the old Tractor to Latrobe, Pennsylvania where they could spend some time.  He would be happy to place his signature on the hood of the Old Tractor.
And as they say…the rest is history.
Story courtesy of Dave Otterdahl, dlotterdahl@aol.com.
6550 York Avenue South, Suite 211 • Edina, MN 55435 • (952) 927-4643 • (800) 642-4405 • Fax: (952) 927-9642
© 2014 Minnesota Golf Association. All Rights Reserved