Fall golf in Minnesota is supreme—here’s what to expect if you forgo football for a final autumnal round.

It's a crisp, sunny weekend in September or early October. The Gophers or the Vikings are playing and you’d like to watch the game. But there’s a better choice, and you take it: a round of golf.

And why not? TV football will still be there when the courses are closed and the ground is frozen; in the meantime, conditions at your favorite golf course are the best they’ve been all year, and with any luck, the tee sheet will be light, thanks to those who stayed home to watch the game.

If you think fall is the best time of the year to play golf–best conditions, best weather, best value–you’re in good company. Minnesota’s course superintendents agree with you.

“One hundred percent yes,” says Matt Cavanaugh, head superintendent at Rush Creek Golf Club in Maple Grove. “We like to discount golf in the fall and that’s the best time to play. The tee times don’t decline, the demand is still there–I don’t understand why we reduce that price.”

Paul Diegnau, head superintendent at Keller Golf Club in Maplewood, says conditions in the fall are “comparable to the rest of the season, if not better. It’s the weather that makes fall golfing so enjoyable.”

Punching the Greens
The great September-October conditions don’t come without a lot of hard work, however. The lush fairways and smooth, speedy greens are the result of many carefully weighed decisions about how to deploy a course’s labor force during the summer months, and there is no more important decision than when or whether to aerify the greens.

Even if golfers reluctantly accept the necessity of injecting oxygen into the compacted turf so the roots of the grass plants remain deep and healthy, they’ve all had the thought: Why did the super have to punch holes in the greens just when they’re at the peak of perfection?

“Everyone hears that comment,” Diegnau says. “It’s how you look at it: Pay me now or pay me later. It’s something we have to do. I can tell you even people that play every day or every other day can be the ones making those comments.”

“You get a mix of reactions,” says James Bezanson, head superintendent at Highland National Golf Course in St. Paul. “A lot of people here appreciate what we have to do to make Highland look as good as it does, but others see it looking great and don’t appreciate the disruption. You’re always going to have some people complain. The biggest thing is expectations. As a golfer, I’m frustrated when I go to a course expecting great conditions and it was just aerified the day before. You’ve just got to set the expectations upfront and make sure the customers are aware.”

Courses used to aerify in September or even early October, and some still do, but a more recent trend is to punch the greens in August when the growing season is at its peak and the greens can heal more quickly.

“Our greens are in best condition during the third week of August when we aerify,” says Bezanson. “I alternate–one year punch a solid tine, next year pull a core. It heals quicker when you do a solid tine. People are amazed at how quick it heals.”

“Back in the day, it [aerification] was always Labor Day and beyond,” says Diegnau. “The issue was if you could get them to heal up in time before winter. Now the trend seems to be August. We started doing that five years ago. The advantage was quick recovery; the disadvantage could be weather. If it’s really hot, you can cause some damage and setback on the greens. The recovery time is 10 days versus two weeks or more. It’s so weather dependent. The later you get, the longer it takes, and then you risk that you haven’t recovered going into winter.”

And yet, pulling nickel-sized plugs from an otherwise pristine green is not quite the automatic practice that it once was. Jeff Johnson, head superintendent at The Minikahda Club, says he does not routinely do core aeration at his course.

“I haven’t found a need for us to core aerify,” Johnson says. “That’s just us. I’m not speaking for others. You just don’t want to automatically assume that’s what you’re going to do. You want to make decisions based on conditions, not just because historically you’ve done it. If we feel we need to, we will. Otherwise, we’ve instigated other practices.” 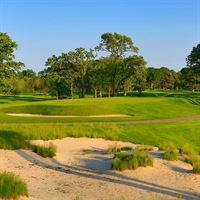 Cavanaugh of Rush Creek has taken the same approach.

“Historically we would almost always aerify around August 30-31,” he says. “But with that, we haven’t pulled a core in five years. That doesn’t mean we won’t do it. Some years we might have to do it based on what I’m seeing. We monitor organic matter; we have USGA sand-based greens and our organic matter was really clean. What’s the sense of a practice that isn’t needed? Last year we did a DryJect—shooting sand into the green. It produced a little bit of a hole. With a small, solid tine, or a sand inject and top dressing, almost no one knows that we do it, and I’m right where I want to be.”

Keeping Surfaces Clean
Whereas the process of aerification can be accomplished in a few days, the task of managing falling leaves can take weeks.

“Leaf removal chews up a bunch of labor,” says Keller of Minneapolis Golf Club. “When they drop in early October, a lot of resources are consumed by leaf-blowing. We try to keep the critical surfaces–greens, tees and fairways–clean every day. We clean up the rough as needed.”

“It starts in the middle of September,” Cavanaugh says. “We have six to eight people start in the morning and spend all day blowing leaves. We get rid of everything; we blow tees, greens and rough to the edges, then pile it up or mulch it. We have six to seven weeks of getting rid of leaves. Maple trees are gorgeous, but if we don’t remove those leaves, a ball could be just off the fairway and be lost. On windy days, we’re blowing off greens in the middle of the day. I’ve been to Hazeltine; they’ll leave an electric blower next to some greens. They’re easy to operate and not going to hurt anybody. This might be our year to try it.”

“Leaf management–making sure you’re blowing them off greens, tees and fairways–can be daunting, but it’s only for a couple weeks,” says Johnson, who also has to deal with acorns from Minikahda’s stately oaks. “Thankfully we don’t have the oaks throughout the property. It’s a bit of a management headache to get acorns off the fairway before you mow.”

The best thing superintendents have going for them in the fall is the cooler temperatures.

“What helps in the fall is the colder evenings slow down growing,” says Keller. “We’re able to mow every other day, alternate with the roller and still achieve the same speeds. Another thing that contributes is that the plant is using less moisture, so we irrigate less, which contributes to firmer, faster surfaces.”
The biggest drawback is fewer workers.

“Shoulder seasons are very challenging,” Keller says. “We lose 50 percent of our staff. There’s always things we could do if we had additional labor.”

Losing seasonal workers can affect shut-down practices, as well. In some cases, it hastens closing dates by a few days to get all the work done.

“We do not cover greens,” Diegnau says. “First of all, you have to have the labor, and that’s a big job at the end of the season. A lot of the private clubs have enough labor. Courses like mine don’t have the labor to do that.”


"It’s the weather that makes fall golfing so enjoyable."

As if you needed any more incentive, get out and enjoy your course before peak conditions come to an end. There’ll be plenty of football to watch in November and December.

Rick Shefchik is a native of Duluth, Minnesota, and learned to play golf at Northland Country Club. He was a reporter and columnist at the St. Paul Pioneer Press for 26 years, and he is the author of "From Fields to Fairways: Classic Golf Clubs of Minnesota.