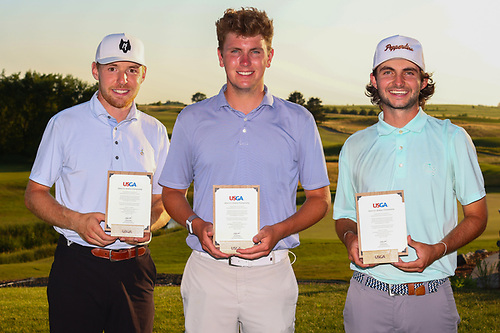 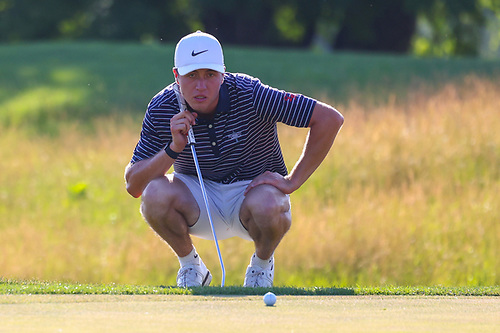 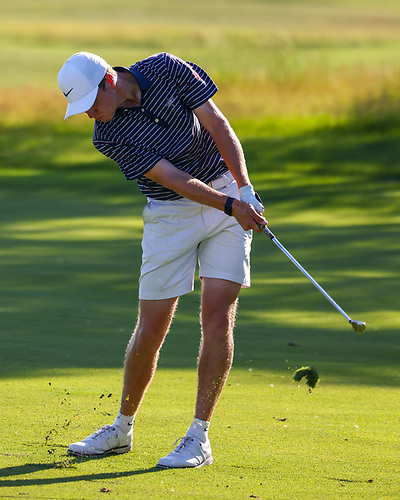 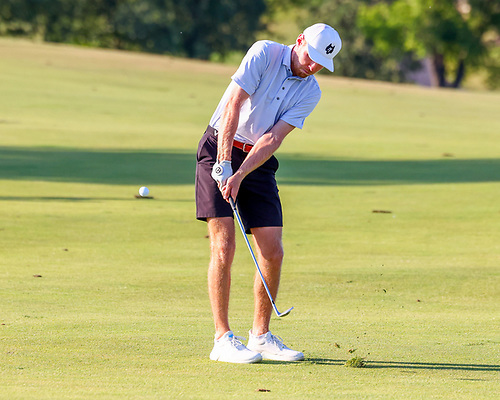 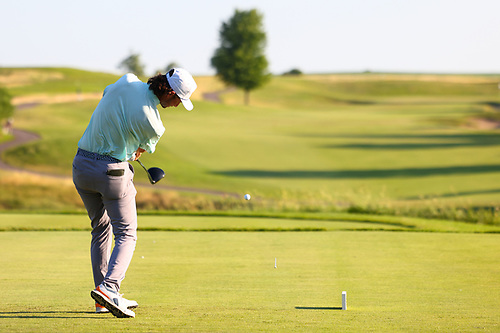 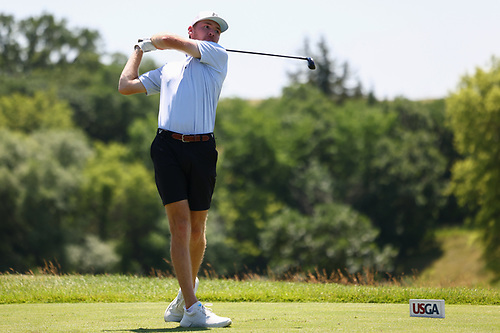 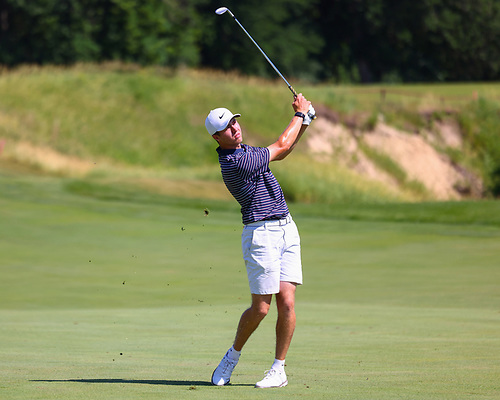 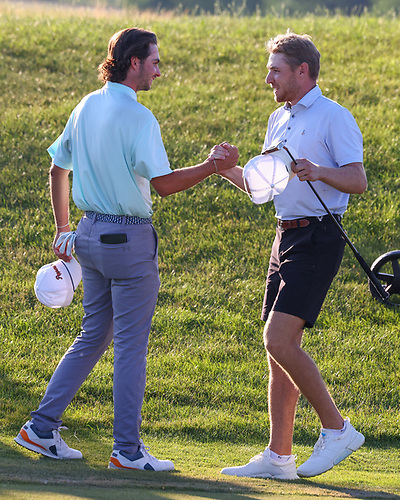 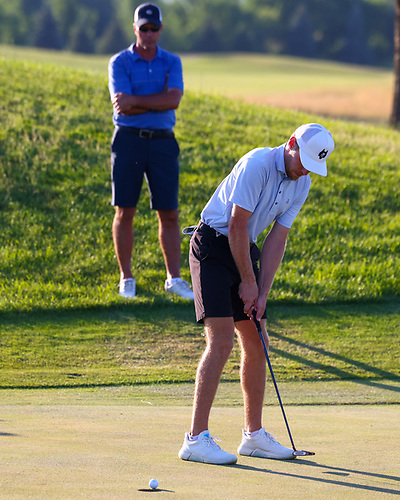 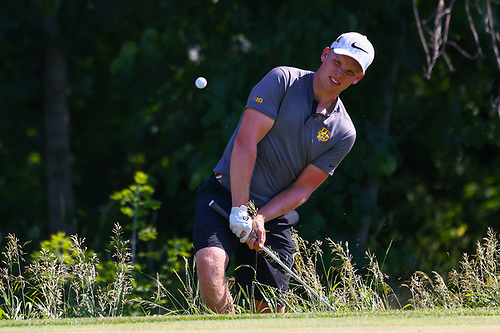 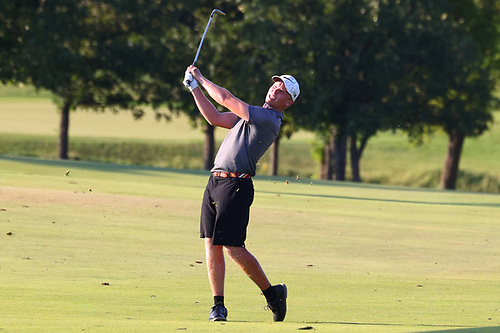 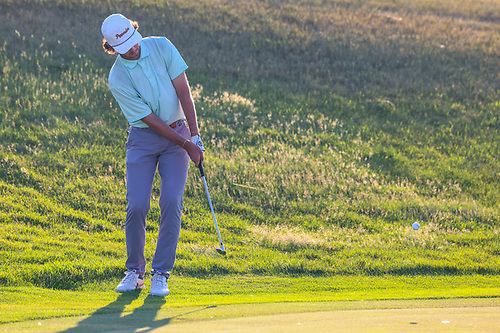 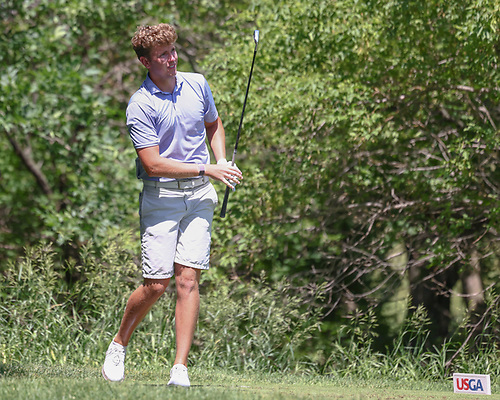 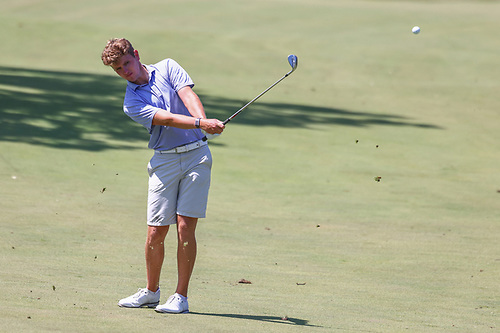 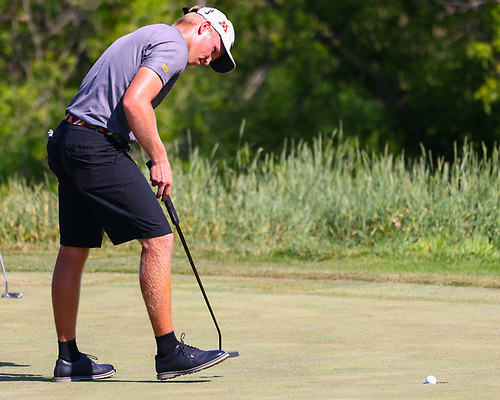 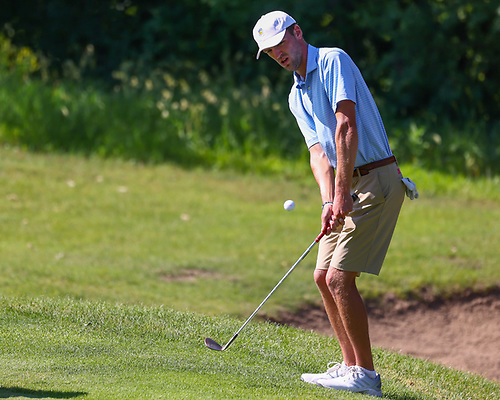 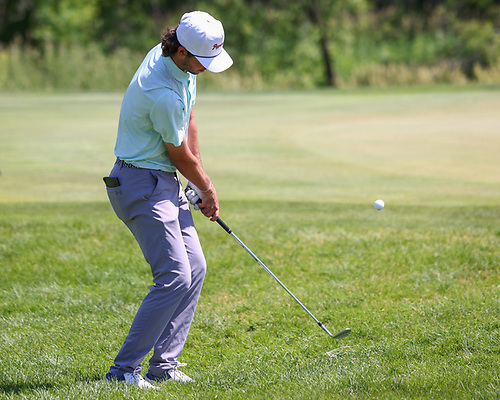 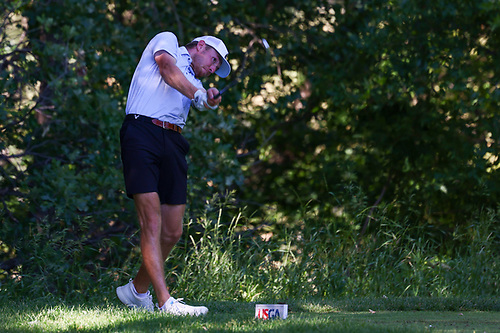 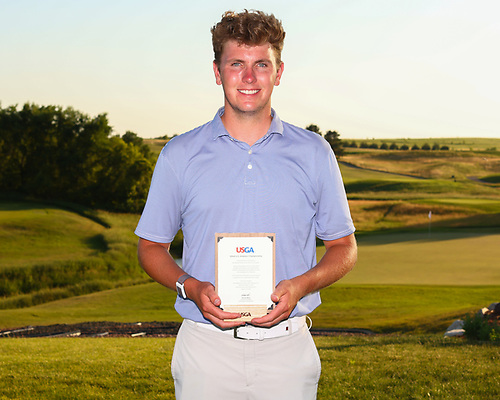 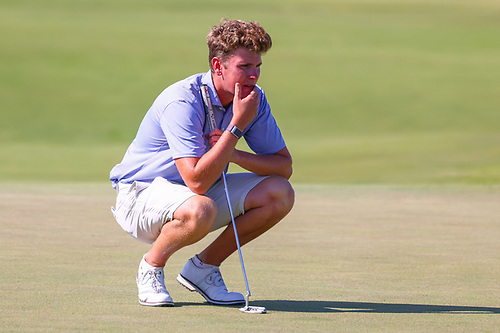 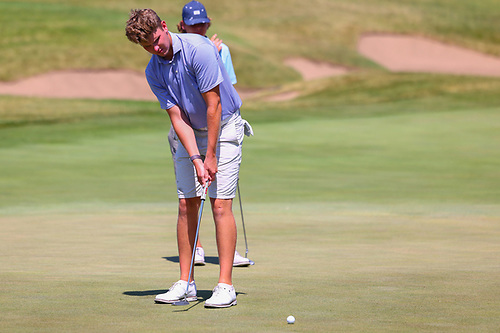 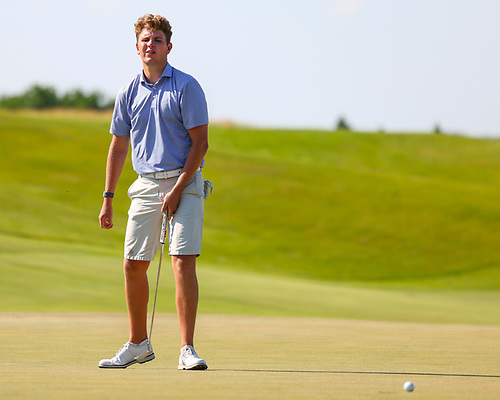 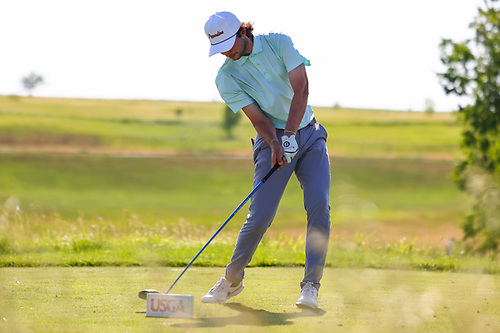 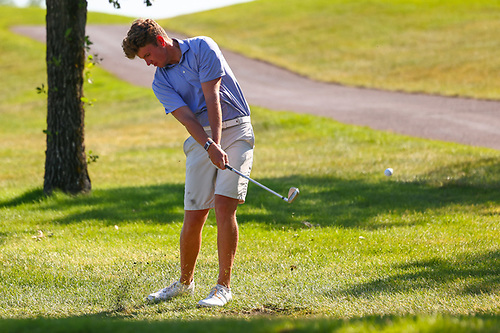 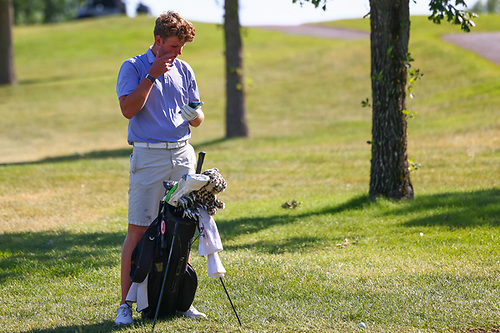 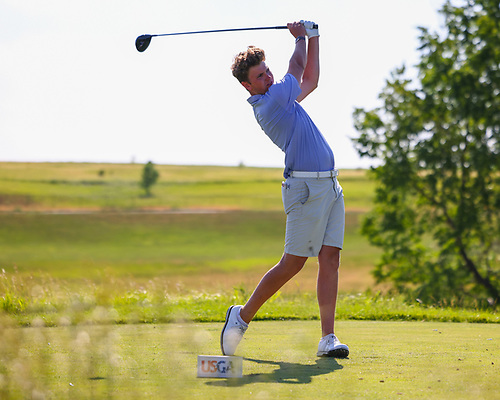 MORTON, Minn. – Carding two birdies and an eagle over a six-hole span during his second round Tuesday, Englishman Samuel Storey posted a 5-under 139 at Dacotah Ridge Golf Club to earn medalist honors and a spot in the 2022 U.S. Amateur.

“This is really cool—it’s as simple as that. I didn’t expect to go through, but luckily two rounds fell together nicely,” Storey said Tuesday. “It’s quite a shock. My family back home is ecstatic and everyone around me is ecstatic.

“I’m looking forward to being able to compete with the best amateurs in the world. It’ll be nice to see how I compare to the guys who are really good at this game. I’m going to position myself as well as I can and see if anything works out."

On Tuesday, a field of 80 players competed for three available spots to this year’s national championship, set to be played August 15-21 at The Ridgewood and Arcola Country Clubs in Paramus, N.J.

Joining Storey at the championship are defending Trans-Mississippi Amateur champion and defending Minnesota Golf Association Amateur champion Derek Hitchner and University of Minnesota transfer Jacob Pedersen, who both survived a three-way playoff after carding 4-under 140.

Both Hitchner and Pedersen advanced to last year’s championship after qualifying at Dacotah Ridge Golf Club. Hitchner posted rounds of 69-76 at famed Oakmont Country Club to miss the cut by two strokes, while Pedersen missed a playoff for match play by one stroke, shooting 74-70.

Storey, a recent graduate of Morningside University in Sioux City, Iowa, carded an eagle on the final hole of his morning round Tuesday to card 3-under 69, despite taking double-bogey on his opening hole.

Beginning the second round on the 10th tee during Tuesday’s afternoon session, Storey three-putted for bogey at the 10th but rebounded by sinking his birdie chance from 25 feet to draw even for the round. Hitting his 6-iron to 20 feet at the par-5 13th, Storey converted his eagle chance to quickly jump into a share of the lead at 6-under for the tournament.

Fueled by his putter early in his second round, Storey again would sink a lengthy putt, this time from 35 feet at the 15th to reach 7-under, but would slow his pace over the final nine holes with a pair of bogeys to finish on top of the leaderboard at 5-under 139 to qualify for his first USGA championship.

“I didn’t realize how tough a day it was until I got here and started seeing people and thought, ‘Wow, there’s a lot of really good players,’” Storey said Tuesday. “There’s a bit of internal pressure to do well and justify why I came up here. Hoping to prove myself and that I belong here.

“The biggest key was being in play with driver. Plotting away around and hitting the right club to be in the right places. I dropped back to a 3-iron pretty often despite having a longer number in, at least the ball was in play. Try to avoid big numbers like I did on the first hole today.”

Coming off his sensational 2021 season, earning MGA Men’s Player of the Year honors, Hitchner appears poised for another strong season after carding 3-under 69 to open the qualifier Tuesday.

Starting his second round on the 10th tee, Hitchner started fast with a birdie on the first hole to quickly climb into contention at 4-under, but stumbled late during his front nine with a pair of bogeys.

Tallying four birdies over the first six holes of his inward nine boosted Hitchner to 5-under but a late bogey forced Hitchner into a three-way playoff with Pedersen and the University of Missouri’s Jack Lundin after finishing at 4-under 140.

On the first playoff hole, Hitchner’s approach rolled off the back of the green, but he would chip in for birdie to secure his ticket to his fourth U.S. Amateur in six seasons.

“Today was a stressful day—I felt I had to scrap the round together,” Hitchner said Tuesday. “Off the tee I felt a little uncomfortable, which is unusual for me because that’s a strength for me. I really made an effort to be as focused as possible and tried to be disciplined with that.

“I’ve been [to U.S. Amateur] a few times now and it’s pretty exhilarating. Hopefully, as I continue to accumulate experience on that stage, I start to feel more comfortable. I’ve missed match play all three times and I’m really hoping to amend that this time. It’s the most prestigious amateur tournament and it’s such a privilege to play there.”

During his four seasons at Pepperdine University, Hitchner played 100 rounds at 35 events with a career-scoring average of 71.78, placing him eighth in the program’s history. He’s claimed 10 top-10 finishes and posted 43 career rounds below par.

Pedersen, who played four seasons at Gustavus Adolphus College and will transfer to the Gophers for his final season this fall, paced the field early Tuesday with his round of 6-under 66.

“I was pretty dialed the first round and definitely had both hands on the steering wheel during the second round,” said Pedersen. “It’s a little stressful when you shoot 66 in the first round because you know you’re in it from the get-go.”

In a moment of déjà vu Tuesday, Pedersen opened the 2021 qualifier with a 66 at Dacotah Ridge and went on to finish tied for second. Following his 66 early Tuesday, Pedersen tallied a 74 during his second round to once again finish tied for second, advancing by sinking a 6-footer in the playoff for his second straight appearance at the U.S. Amateur.

“There was a little bit of nerves, but it’s such a long day, it’s hard to stay in it mentally and grind for 11 straight hours,” he said. “I wanted this one really bad. Last year I had no idea what I was getting into,” Pedersen said. “Now that I know what to expect, I really wanted to get back.”